“The Somali Bantu have a very rich African culture of art, music and healing traditions that we have turned to when governments have denied us access to basic necessities. Basket making is one of the oldest traditional arts of the Somali Bantus. A basket was not simply a container, but it was a form of art that represented the dignity of the bearer. One could determine a person’s social status from the kind of basket they carried. Basket making for the Somali Bantus was a significant aspect of our culture, and throughout the regions, people created different kinds of baskets. The Somali Bantus are not organized into tribes, except when that was imposed on us by people demanding that we become slave owners. The way we identify is by region and by the arts and tools they use. A brother can live in a different part of a geographic region, and because of this, he will identify more with that region than with the group to which his brother belongs.”

loving anvil
Online Business
We are Gil and Coco – husband and wife team that makes up Hogfarm Studios  in Biddeford since 2005!  We’re both artists (Coco mostly metalsmithing @lovinganvil and Gil mostly painting @gilcorralart) We live and work…

hogfarm studios
Online Business
Gil Corral received his BFA from the University of New Mexico. He is the director and founder of Hogfarm Studios in Biddeford, Maine, where he works, teaches and guides.  Additionally, the Hogfarm is an active…
Liany Media, LLC
Portland, Maine
Liany Media, LLC, is a photography, audiovisual, video live streaming and sound system company based in Portland Maine. Aimable Nduwayezu, a Burundian New Mainer and trained sound engineer. 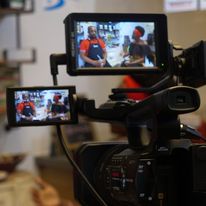